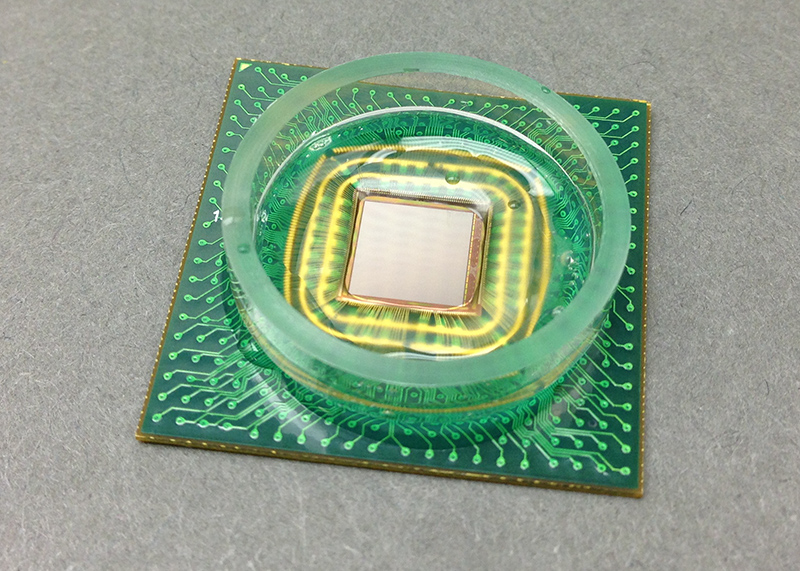 We are developing tools for neuroscience that exploit CMOS technology and nanoscale interfaces, including dense electrophysiological recording systems with more than 64k channels. We are also developing various optical and acoustic systems on CMOS for interfacing to both the CNS and PNS.

Dendritic spines are the primary site of excitatory synaptic input onto neurons, and are biochemically isolated from the parent dendritic shaft by their thin neck. However, due to the lack of direct electrical recordings from spines, the influence that the neck resistance has on synaptic transmission, and the extent to which spines compartmentalize voltage, specifically excitatory postsynaptic potentials, albeit critical, remains controversial. Here, we use quantum-dot-coated nanopipette electrodes (tip diameters ∼15–30 nm) to establish the first intracellular recordings from targeted spine heads under two-photon visualization. Using simultaneous somato-spine electrical recordings, we find that back propagating action potentials fully invade spines, that excitatory postsynaptic potentials are large in the spine head (mean 26 mV) but are strongly attenuated at the soma (0.5–1 mV) and that the estimated neck resistance (mean 420 MΩ) is large enough to generate significant voltage compartmentalization. Nanopipettes can thus be used to electrically probe biological nanostructures.

We present a system for large-scale electrophysiological recording and stimulation of neural tissue with a planar topology. The recording system has 65,536 electrodes arranged in a 256 x 256 grid, with 25.5 µm pitch, and covering an area approximately 42.6 mm2 . The recording chain has 8.66 µV rms input-referred noise over a 100 ~ 10k Hz bandwidth while providing up to 66 dB of voltage gain. When recording from all electrodes in the array, it is capable of 10- kHz sampling per electrode. All electrodes can also perform patterned electrical microstimulation. The system produces ~ 1 GB/s of data when recording from the full array. To handle, store, and perform nearly real-time analyses of this large data stream, we developed a framework based around Xilinx FPGAs, Intel x86 CPUs and the NVIDIA Streaming Multiprocessors to interface with the electrode array.

Electrostatic melting in a single-molecule field-effect transistor with applications... Scroll to top